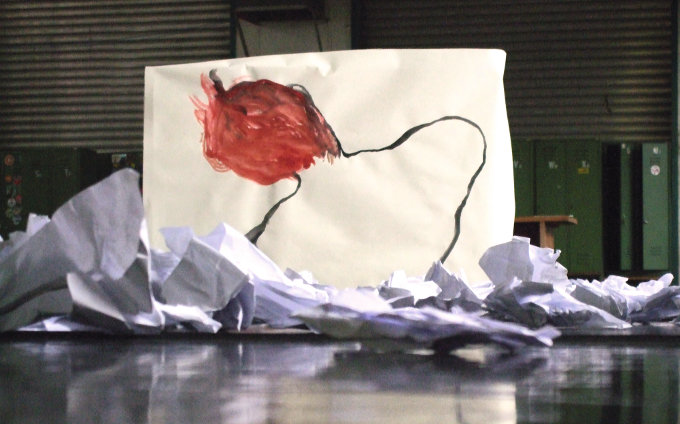 When someone on the inside is asked about the progress of circus development in the UK they will often gesture to the distant figure of dance – some way ahead on the running track – and say that in twenty or thirty years, with patience, we might be where they are now.

On the surface this is an industry comparison. Dance has gradually worked its way to the infrastructure and resources circus would like to have: a reasonable number of dedicated venues and festivals; a handful of active national agencies (mostly founded during the 1990s) that advocate and lobby at the governmental level, conceive strategic development projects, and work with a larger body of regional agencies; dedicated departments within various funding systems (descendants of the dept. opened by the Arts Council of Great Britain in 1979); wide provision of higher education training; and an intellectual/theoretical discourse that's successfully looped back round to feed directly into the training and education process.

But the comparison also recognises that circus has a similar path to follow as it expands its aesthetic range and starts to question what actually makes something 'circus' – what components or properties are essential to it, if anything even is. Today circus artists are busy investigating and pulling apart the underlying principles of their form, and the field as a whole is still establishing alternative education processes to those based only on the mastery and execution of codified technique. Perhaps this sort of work is ongoing for dance as well, but the artform is nonetheless further ahead in identifying and breaking down the various parts that make up its whole – choreography, movement, gesture, rhythm, and all the rest – and in leading artists and audiences to a more sophisticated, nuanced understanding of the form.

So given this state of play there's something interesting in Currency, a short programme of dance, circus and physical theatre curated by The Place and Crying Out Loud with support from the EU Commission, London and EUNIC London. Each of Currency's four nights consists of a performance sharing (the result of a collaboration between two artists with distinct contexts), a dinner, and a full performance work that's difficult to define or characterise – one crossed by the axes of several performance practices.

As you'd expect, the programmed works are singular and intriguing. In Se perdre fait partie du jeu German artist Julia Christ explores the idea of the body as a receptacle for memories. The piece is inspired partly by paintings of Julia made by Sashiko Yoshimura, and these artworks themselves appear on stage as counterpoints to the living body.* In Your Majesties the Austrian duo Navaridas & Deutinger revive Barack Obama’s 2009 Nobel Lecture as a textual choreography, and in MM the Swedish artist Ludvig Daae enters into a dialogue with his own filmed image. There's work as well from the Czech/Finnish company Krepsko, and from Simon Tanguy, Roger Sala Reyner, Aloun Marchal, and Lander Patrick – all in all, artists from ten countries are presenting at Currency.

Czech/Finnish company Krepsko perform Alma and Amanda on 23 November. Crying Out Loud director Rachel Clare: 'I saw Krepsko perform in a windy park at Letní Letná festival in Prague five years ago and have been keeping them on the radar ever since. Linnea Happonen is an extraordinary creator with an identifiable Czech quirkiness (think Jan Švankmajer meets dark illusionary circus, and puppetry), and co-performer Henna Kaikula needs no introduction – she's the memorable Finnish acrobat seen in London in Cantina last year.'

For both the curating partners Currency certainly isn't their first project to investigate interdisciplinary performance. Crying Out Loud's roving eye has always crossed the boundaries of genres in search of experimental and emerging work, and in late 2010 they ran The Blender, a three-day project, funded by Jerwood Charitable Foundation, that gave five choreographers the chance to work with a pool of willing circus artists. The Place hosted Mathurin Bolze and Hedi Thabet's piece Ali as part of the 2011 Dance Umbrella and have programmed many other pieces, particularly though not exclusively in the context of the Place Prize, which have varying shades of circus or physical theatre.

Eddie Nixon, director of Theatre and Artist Development at The Place: 'Considering dance and performance as a pretty broad church is the way we have been programming and supporting work for a few years now. Currency places this in a European context and continues our desire to bring the audience closer to the work by offering contextual events each night. We are trying to encourage conversation about performance that is on the fringes.'

Asked about the differences between contemporary circus and dance, Rachel Clare, artistic director of Crying Out Loud, warns that it's reductive to generalise and points out that many artists individually cross genres in their training, but nonetheless offers a few thoughts. 'One obvious difference, in the UK, is that circus artists are often constrained by their set act as it limits their creative involvement in a whole show,' she says. 'Considering the lack of structured support (there are no development agencies as there are in the dance sector) UK circus artists have a strong sense of survival and are incredibly resourceful in making things happen with little infrastructure, but in Europe it's a different story. There's an accepted and developed blurring between dance and circus there, plus a string of creation centres and opportunities for funded residencies.'

Currency is a small step toward bridging this gap, and feels in fact like it's been constructed as a working model for a larger collaborative system and culture – the miniature version of an open, idealistic environment that connects artists across disciplines and national borders, presents process alongside performance, and encourages the involvement of audiences in a debate around the fundamental nature of artistic work. The performance sharings that begin each night of Currency ('sharings of physical ideas') are also only the visible end of a miniature residency process: artists were selected and paired to spend two days exchanging ideas in a studio environment.

'Most of the artists haven’t worked together before,' says Rachel. 'We chose artists who are combining forms and whose work is often unclassifiable because they forge new ideas through collaboration. It's unknown what the result will be, but that's the exciting part.'

* Due to injury Julia Christ has been replaced on 14 November by Jeanne Mordoj, who'll perform La Poème.

The event is produced by The Place and Crying Out Loud in partnership with the European Commission, and is supported by EUNIC London.