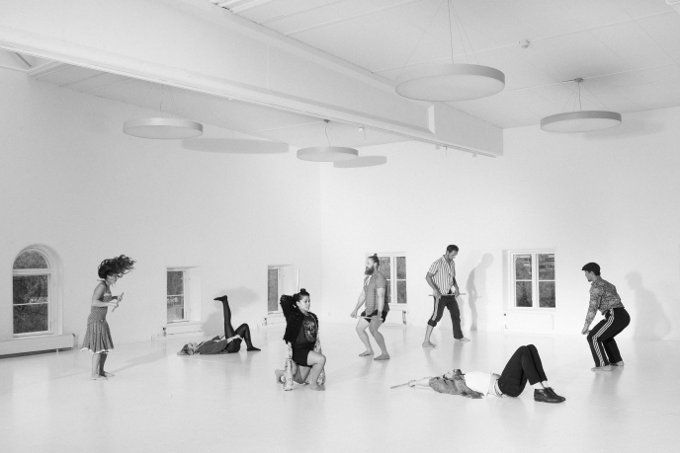 Past the turquoise-blue arm of a buried giant that reaches from the earth – or now, more likely, the snow – to clasp a juggling ball, somewhere on the outskirts of Stockholm in the Botkyrka Municipality, you will find the complex of buildings that forms the heart of Subtopia, a huge creative facility that hosts some fifty organisations working, mostly, in circus or film. A little further down the road lies the nondescript, squarish warehouse of Hangaren, a year-round large-scale circus venue, and, for three days every February, the home of Subcase.

Subcase began in 2009 as a showcase for artists and companies that had some connection to Subtopia itself, then from its second edition expanded to encompass the Swedish context, then between its third and fourth edition (around the time of the Nordic Circus Year) grew again to include all the Nordic territories.

'My eyes were Subtopian and Swedish in the beginning,' says Kiki Muukkonen, the director of Subtopia's artistic programming and the organiser of the first Subcase. 'Nowadays my eyes are Nordic. And this does not go only for me – this has been a general phenomenon of Nordic circus development: our circuses and companies have become Nordic as opposed to national or local. There is now a Nordic identity which, in the first years of Subcase, didn't exist in the circus field. Many cooperations have been born over the national borders, perspectives have been mixed and broadened, artists feel connected on a Nordic level.'

As Nordic circus has interconnected it has also seen, in recent years, a great flourishing of creative work, support projects and new facilities – from the growth of DOCH, to the creation of Cirko Center, to the work of the Juggling the Arts laboratories, to the development of Norway's Circus Village.

The sixth edition of Subcase draws from this activity to programme ten full-length performances and five works-in-progress, most of which have been supported in some way either by Subtopia or partners of the New Nordic Circus Network. 'The programme is quite diverse this year,' says Kiki. 'As far as I can see there should be projects for many different interests and contexts. There are many intimate concepts and solos this year, but that, I would say, is a general European trend – artists wishing to dive into their own artistic universes and explore and express them without a collective. I would wish for more large-scale work from the Nordic scene, and I'm happy to see that the ones who have the capacity to create that are taking the chance/risk – Cirkus Cirkör and Race Horse Company will both present upcoming large-scale projects.'

In the mix, Subcase visitors will be able to get the measure of DOCH-trained jugglers as Ron Beeri presents the solo “YAD”, and Water on Mars (Tony Pezzo, Wes Peden and Patrik Elmnert) show their show The Show. In Compositions for air and space Ilmatila shuffle the deck and present another configuration of Ilona Jäntti's repertoire of short aerial pieces (this time collecting Muualla, Footnotes, and A pony is a small horse). Cirkus Xanti's Amber, formerly titled Bastard, is a personal, intimate, introverted piece about memory and the Norwegian countryside that is nonetheless on the threshold of propagating all over Europe (with versions available in seven languages). And elsewhere in the programme there's Salla Hakanpää's solo rope piece Pinta (Surface); Finnish company Clunker Circus' Wonderfully much of everything, the advance material for which has slightly the flavour of an indie film about the power of misfit thinking; and Oddman Productions' 1 ½, a show which is charming on the outside and perhaps physically gruelling on the inside as Frida Odden Brinkmann transforms herself into the ill-tempered, half-size puppet Antero.

Five companies will also present works-in-progress, among them Cirkus Cirkör, whose Present Pastime is the second Cirkör piece to be directed by Olle Strandberg (of Undermän fame). Of the piece Olle himself says: 'At the start of the process I wanted to deal with life as a fall towards an unavoidable crash-landing. In a time where a higher purpose is not so clear – or even existent – it’s so easy to get lost in random efficiency in the name of capitalism or whatever. In Present Pastime the seven artists on stage have all chosen to dedicate their lives to seemingly meaningless activities but they have gone from doing it for themselves to a will to convey something. An alternative.'

Also presenting works-in-progress are Sirkus Aikamoinen, Cie Vu, TinCanCompany, and Johan Wellton, while another seven artists/companies will throw out their early ideas in a Pitch Hour.

Extra Subcase events this year include a seminar on international cooperation, a presentation of the new cross-Atlantic collaboration Autopistes, tours of the Subtopia complex, a Circus Marketplace to meet artists/companies, and the final Unpack the Arts residency, which will see twelve cultural journalists visit the showcase for an intensive contemporary circus encounter.

'In its first year Subcase was done with no funding whatsoever,' remembers Kiki. 'The artists were the technicians and helpers. We did it together. There was a schedule for when artists would help out other artists with their shows. I think about ten programmers came, or something like that. One Norwegian, one Finnish, one Dutch... and then I think the rest were Swedish. Since then Subcase has grown organically – in every way I would say.'

Subcase runs 12-14 February 2014, and expects to host some 120-150 programmers. The showcase is closed to the general public, but circus programmers and venue producers can register here for a flat 500 SEK (~ 50 Euros).