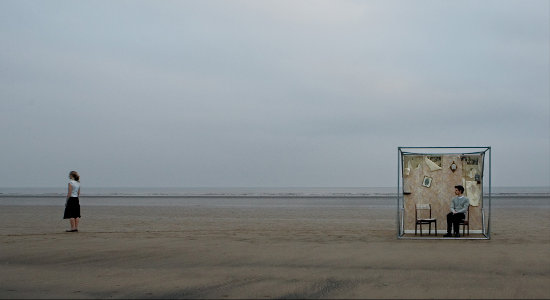 At the centre of Green Eyed Zero's In the shadow of picture frames is the phone. An old Bakelite handset with a bell ring, it sounds repeatedly but goes dead before anyone can answer. Who is phoning? What do they want? Why don't they speak? In time the narrative mysteries resolve, the identity of the caller is discovered, but there's a lingering sense of outside agency and paranoia which is the production's true aftertaste: presence-without-communication and presence-from-a-distance combined to menacing effect.

It was only after seeing picture frames, the next day I think, that I read the programme sheet and learned that there had been no technician: all the cues—for the phone, but also for the recorded sound and the film projections—were controlled by the performers themselves using a series of hidden remotes. It can only be a good thing that I was oblivious to it all during the performance, but I was interested retrospectively, and when I met the company, Rachel Pollard and Sebastien Valade, I asked them how it all worked.

'Each wing of the stage, either side,' explains Sebastien, 'we have two laptops which are actually connected together so they act as one; and to run all the cues we've developed a programme specifically for our performance, written from scratch.... It was quite a massive thing. At the beginning the idea was to just try and see what we could do and then the more we developed it the more complex it became. It took me about six months of working really hard on the thing before it ended up being stable and good to use in a performance.'

Wii remotes, connected to the computer via Bluetooth and secreted in stage props, are used to cue in music and sound (there's a small motor inside the phone that makes it ring), though of course there are times when the company need an effect at a time when they can't get to a remote, and so many of the cues are on a delay (with the longest running a tense 90 seconds). For Sebastien and Rachel it's a taxing form of double performance: they need to remember their lines and scripted actions, but also have to hold in mind and fulfil a full tech sheet—without letting either one distract them from the other. It's only gone wrong once. Sebastien: 'During a show the computer completely bugged and instead of playing the next cue it was always repeating the same cue, and we had to go and skip manually to the next and then it was repeating that one again, so we actually had to stop the show for 5-10 minutes: time to reboot the computer, reset everything, and explain to the people. That was bad.'

Stressful, demanding, impossible to cover for if it goes wrong, and forcing stage intensity simultaneous with technical detachment—surely most performers encounter this only as a bad dream. Why choose it? 'We're a bit control freaks so we like to be in control of everything,' says Sebastien, but he explains also that the production tours for tiny runs, a night or a few nights, and there's no time for a house technician to become reliably familiar with the show's 35 cues. The company simply can't afford to have their own technician tour with them. Now they're thinking about developing the software and selling it to other small theatre groups—'people on a budget who want to be self-sufficient'.

If the technical side of Green Eyed Zero comes from Sebastien (he's the prototypical juggler with a Masters in Engineering) then Rachel is the one who handles the text. The version of picture frames I saw—the last date on a long tour—used text to drive forward its tense narrative, but the earliest iteration, developed as part of the Circomedia course Sebastien and Rachel attended, had none. The problem? 'No one got the story at all,' says Rachel. 'Originally we had a website that when you got your tickets you were invited to go there and get little clues about each of the characters and the neighbour and find more information, but it's just so much work and no one went there. It's so difficult to do interactive things; you need to make it so obvious and we're trying to be really subtle. For the first piece we had no text and it was just too subtle.'

The desire to fully engage the audience, coupled with the lessons learned from their first production, is informing the company's new piece. Taking as its starting point folie à deux (a madness shared by two), the production aims to work its themes into an ambitious technical frame. 'We're probably still going to use the same programme to play the cues when we need to,' says Sebastien, 'and then we're developing a multitouch screen—a bit like an iPhone but much bigger. I'm developing a programme, an application, that is currently working on a small-scale prototype, where we can zoom in and manipulate objects on the screen. Then we'll make it to a larger scale. And then with this theme of folie a deux, the underlying idea for the touchscreen is to show "impossible" things and how in the mind you can develop paths that are completely wrong.'

The company remain mindful that their shows shouldn't be about the technology, but where In the shadow of picture frames hid its remote controls (in books, in drawers, and, at one point, audaciously, taped to Sebastien's back) the new piece will leave everything onstage and clearly visible: to give the audience an insight into the underlying mechanics of the work, and so as to never again face a situation where a malfunction leaves the performers trapped between having to be onstage to cover for the problem, and offstage in order to fix it. It's an open approach that the company want to extend into other areas: particularly into the characters, which, rather than being acted personae, they want to move closer to aspects of their actual selves. 'We want it to be a bit more real,' says Rachel. 'We found with In the shadow of picture frames some shows went really well and we really hit it and on other shows the text didn't really work as well. We think if it's more us then it's going to be harder, but that's how we want it: more real, more human.'