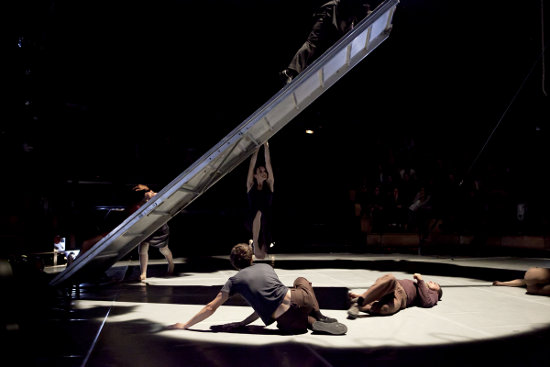 It's all about the carrots. In a carrot-driven society where everyone wants more carrots and is not content with the carrots they have, human beings are reduced either to unthinking automatons or to cruelly acquisitive, carrot-hungry Machiavellists. Holding a single coveted vegetable aloft, Jules Beckman, Autochtone's limping, devilish consumer-preacher, turns the heads of the assembled men and women: they follow his hand, left, right. When he plays kick-drum and bass guitar and shouts MEDICATION TIME they run on with carrots strapped to their noses, Pinocchio-style. An act of defiance in this world is throwing your carrots to the ground; not giving a shit about carrots as a whole.

It's not so symbolically laboured or dogged as that makes it seem, but Autochtone does use shorthand in gesturing toward common social maladies, and in doing so gives away its power to change the way you think about things, to deliver more than a transient impact, to transform. The political dimension of its subject matter is collapsed into the caricature of Beckman's dark master, who begins the performance walking in circles to follow a suspended metal obelisk as it swings around the chapiteau ring, beating a rhythm to punctuate his proselytising on 'The New Paris, The New France', speaking in English with an American accent.

Covering its shortfalls with aggression, Autochtone is rock circus. The metal obelisk comes to ground and is fitted over a staircase to create a clattering slope down which domestic instruments are tossed – cutlery, wash basins, clothes; then performers are sent tumbling down too. Objects litter the stage. Two acrobats perform as a woman furiously cleavers a red cabbage. The preacher says: 'The human body is fragile. The human mind is fragile.' A pneumatic presser is brought on and used to crush inflated plastic, then a man is lifted in and slammed.

The production prefers for the most part to split or to highlight the members of its large cast – either scattering the performers around the ring and at the various levels afforded by the floor, the metal obelisk slope (which later is lifted at one end to become a kind of marquee), a raised trampoline, and the chapiteau rigging; or else focusing on a single artist for a skills piece. Some of these solos are very good. Fabian Wixe is remarkable on Chinese pole, swinging his way into fast, fluid sequences, and exhibits a way of carrying momentum that I haven't really seen before on the apparatus. A sequence on corde lisse by Fanny Soriano is beautiful and has a couple of especially stunning tricks for rope-nerds, but – and this is the problem for all of Autochtone – is contained within a superficial and disposable frame: as she descends the rope Fanny is obscured by a sheet of black polythene. It's visually pleasing as it drapes over to obscure her movement, and, released, floats down like a ragged ghost. I suppose that it's meant as a universal symbol of consumerism and waste (at the end two performers come on with wadded bin liners obscuring their heads), but there's no sense that the aerial work activates or draws strength from that metaphor. Likewise, a solo on trampoline is shadowed by a masked long-necked ghoul rolling in brackish water beneath the net, and I'm not sure what it was; it came on with a bucket full of I think human heads, harried the trampolinist, disappeared.

The choreography (by Karin Vyncke) drives a wedge between the character of the performance and its execution. It has moments of strange beauty – as when, toward the end, the cast gently press their master to the floor and arrange his limbs as though disjointed by a long fall – but there's nothing that feels random or improvised: even when the performers are falling down the slope or running full-tilt across the stage, it seems fussy and precise, an impression only heightened by the cold lighting and dark, muted colours of the costumes and scenography. With a piece of kit like the pneumatic presser, you feel they built it and wheeled it in specially – that it's careful anarchy, rehearsed and choreographed. And when the final scenes bring freedom and release, nothing has changed – not really. For all that it's processed through an abstract and purposefully adult language, Autochtone is yet another show telling you that you're in the machine and need to break free on swinging trapeze. Ask yourself: is that what you need?