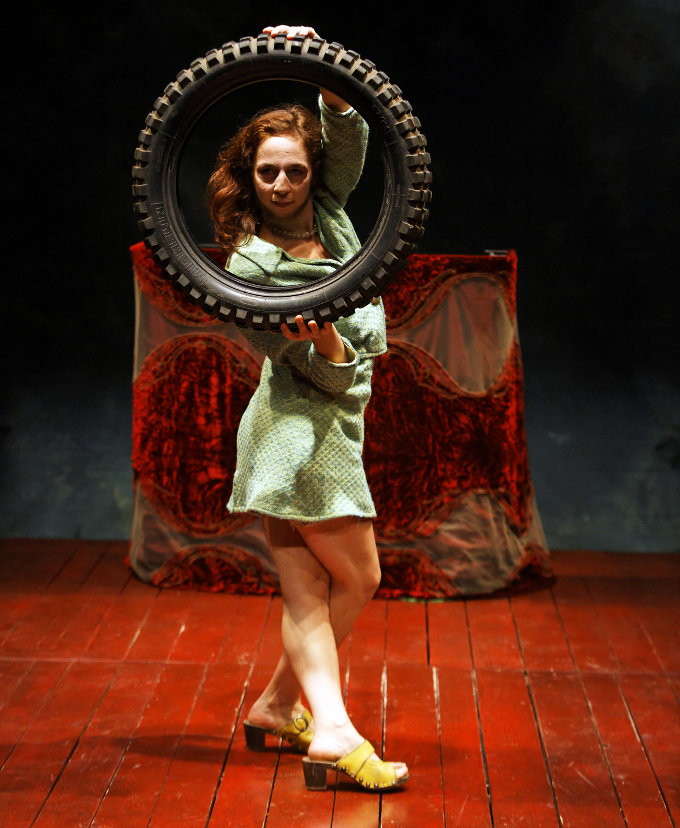 Bring on the gallows! A trapdoor in the floor is thrown back and the gallows carried in, fixed in place over a tank of water, and strung with a perforated metal box that contains two animate badger skulls (brothers). In punishment for their disobedience, they are lowered into the water and held there for several minutes. One skull lives, the other doesn't make it; both are already dead of course. Later the survivor, sat atop a mountain of shells, recalls his death as a champion following a heroic yet ultimately lethal victory in an interspecies snail-eating contest.

Eloge du Poil (In Praise of Hairiness), Jeanne Mordoj's weird, beautiful, wilful solo, takes as its starting point the bearded lady and with a few quick leaps leaves that point vanishingly distant. In spite of a midpoint where Mordoj—who wears a beard for the performance, and who spent time researching the history of the bearded lady and eliciting contemporary reactions—addresses the women in the audience to ask them where they are hiding their beards and to explain how powerfully men are drawn to the extra hair ('I say “come into my beards!”'), gender politics mostly inform the material of the piece by subtler means. You're best off setting the word 'hairiness' here alongside the broadest definition of 'queerness', because what the piece praises and celebrates is a lived state of subversiveness, restlessness, disorder and marginality: short lives, uninhibited sensuality, ecstatic death.

It's the sort of show where you don't want to say too much, meaning that it's not just prohibitively difficult but against the entire spirit of the piece to try and collect its many lines of thinking. Its determination to unsettle itself, and the recognisably French humour of low interruption that runs throughout, gives rise to a loosely associative chain of scenes held together by Mordoj's stage character: her face is carefully blank except for the eyes, which seldom look straight at you, instead coming in askance to add a light cover of collusion and self-awareness. A sequence where she cracks an egg and saves the yolk to send it, whole, on a journey down her angled arm, across her chest—to give the unborn a taste of life, she explains—is funny and ridiculous and tense and remarkable, the yolk alive and resolute as it works its way around Mordoj's body. When it breaks you feel it had a good run—a short, good life. It's a feeling, like so many of those in Eloge du Poil, that you can't pin down or really look at—or don't want to because they have that same fragility. In the next sequence, having washed and clothed her bare arms, Mordoj brings out long bowed canes with wooden heads—birds or the ghosts of birds—and balances them on her head, shoulders and fingertips, setting them gently rocking. They move in sequence, cross, fly out and in. Mordoj is inside them.

I suppose that Eloge du Poil has its artistic influences, but for me its greater sense of disruptive individualism releases it from the burden of being a piece of theatre: stage images and effects arrive with no trace of their cleverness, registering as direct current. When Mordoj empties a sack of shells onto the stage and uses her forearms to push them rhythmically forward, their cascading sound mimics the sea so eerily it startles you. Eloge du Poil just feels fresh. Unsuited to any medium other than live performance, unperformable for anyone other than Mordoj herself (ventriloquist, puppeteer, contortionist, bearded lady), it will linger long in the mind.