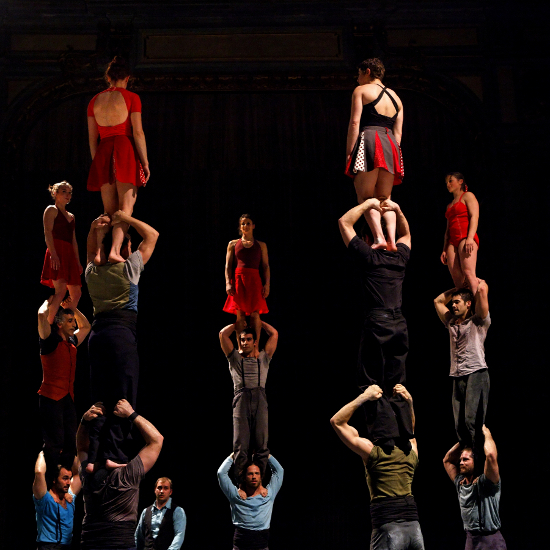 Le Grand C might be disruptive to your normal breathing. Working with pitching (one of the oldest acrobatic disciplines, where groups of bases toss flyers to each other's waiting arms), Compagnie XY ensnare their audience in a constant action of tension and release: whether it's the short sharp shock of a high, thrown somersault or the knot of anxiety that tightens as a human tower grows ever larger, you find yourself complicit simply because you're watching.

It starts slow, with a single log (about 3ft high) placed at the centre of a dimly-lit stage so that the performers can, one at a time, slowly and deliberately mount it—giving us a demonstration of the technique that will later be used with humans as the base, and an opportunity to see the slight individual variances that can exist within a standard method. When the piece moves into a faster mode, with most or all of its seventeen acrobats on stage, it's harder to discern individuals within the fast-moving fleet of images. We see the abstract—one flyer arrowing underneath the high rotating arc of a second—but also the representational: a quick-formed rugby scrum; a witty construction of a circular triple tower that acts as scaffolding for another tower built within; an unforgettable image of a synchronised swim, the women drifting and turning softly on the shoulders of the men. It's subject and language is social life. At its busiest it feels like a town on stage.

In one sense it plays perfectly in the round—the openness suits its expansive, gregarious qualities—but I wonder if the staging also contributes a little in undoing some of the production's theatrical artifice. After a palpable sense of misgiving during the dark and mostly silent log intro (everyone presumably worried they were in for an unbroken hour of self-involved French weirdness) the audience became captive, and applauded more or less every trick. It can't be entirely snobbery on my part that makes me think that applauding the physical act itself can marginalise what goes on around it: when the piece is light and easy it doesn't matter, and even further expands the sense of community and support; but at the moment when a three-person-and-one-log tower collapses (which I think I'm right in assuming was a scripted action) the applause overwrites the signals, of irritation or blame, that then pass between the group: small dramatic gestures, elements of constructed character, are lost. Is that really important? That the audience should hold the performers very tightly to being only themselves? I'm not sure, but I'd be interested to know how Le Grand C plays in France, and whether the greater status accorded to circus there has also produced audiences who watch the work, and respond to it, on different terms.

Nevertheless, again: it's a work of beauty and great skill, and nowhere more so than in its closing scenes, where the performers suddenly start to speak, and to shout, and then to sing. A small simple song, a workaday song, is picked up by the group, passed around and repeated. It rests eventually with the base, who continues, alone, as a tower of flyers slowly builds on his shoulders—his breaking voice a measure of the phenomenal stress running through his body. When the fourth person mounts he falls silent, and the final moments of the show are in silence—with the towers built now under the spoken instruction of one of the group, and the rest gathered silently waiting to catch whoever falls, their arms outstretched.