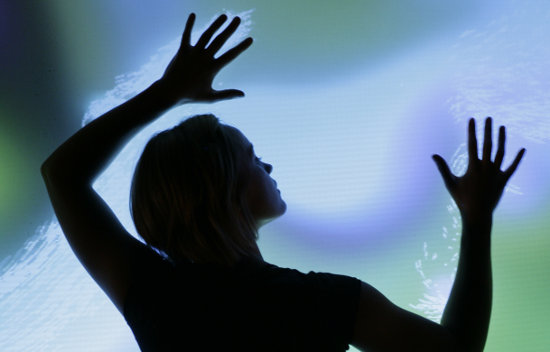 Two characters, a man and a woman, are undergoing a rehabilitative process, alone except for the ambient voice of a calm, insistent psychiatrist. The man remembers a terrible accident, and struggles with depression and thoughts of suicide; the woman's memory slides away whenever she comes close to its pivotal moment. Behind them a scaffolding set is the skeleton of a building that can be climbed through and over, and supports a screen that responds to touch, illuminating and tracking, alternately obscuring and revealing something of the inner truth of the characters' lives...

Green Eyed Zero's Rachel Pollard and Sebastien Valade, graduates from Circomedia, aim to work with digital technology, circus skills (mostly object manipulation) and narrative – and, honestly, in this production, the circus is the deadweight. I really liked the way skills pieces crystallised within the drifting emotional states of the company's last show, In the shadow of picture frames, but I think with Folie à Deux they've set themselves a harder task by making the juggling sequences literally symbolic, or monosymbolic, tied in with the displacement of the woman who can remember her lost child only as the ball he might have played with. It's a heavy, demanding structural design at odds with the company's freer approach to digital imagery – lyrical and sideways-looking and often quite beautiful – and to text, or to words, which they use as individual associative units, like memories themselves: trapped, cracks, broken, falling. Words drop from a book trailed across the touchscreen, or swim past in a shoal; words are seen, rather than read. It's the hypertext, where every word is a link, though you don't know always to what.

There's a whole set of interesting ideas in Folie à Deux that start to work with the metaphors and behaviour of technology, reflecting on the ease with which we can create and access digital cues to memory, and the deep and utter strangeness of using touch to navigate textureless, substanceless images. But I think as well, and perhaps without meaning to, by its choice of subject it ends up asking some difficult questions about what responsibility we owe to information itself: it's easy to find out what 'folie à deux' is, in a summative, encyclopaedic way, and easy to follow connections and links to other facts and points of interest, yet harder, and necessary, to respect the experience at the root of that information: in this instance trauma, illness, and great vulnerability. Folie à Deux isn't insensitive, and in shaping a narrative from a medical condition I think Green Eyed Zero have tried to create something that is theirs and that is authentic. And I don't know much of anything about how the company arrived at the decision to make a show around this subject matter, or what their own relationship to it might be, but I know that in watching the piece I had that uncomfortable, recoiling sensation of watching theatre that wasn't in control of its signals and effect. It is hard to stage a suicide.

It feels as though this is something that is happening more: artists working in circus, which is still a young artform, casting around for material, approaching horror and pain principally as an expression of a wish not to make light or shallow work. Despair is on the rise. Well, fine – but it will be the job of those same artists, and their audiences, to go deeper than a flitting surfacey interest in definitions and connections, and to exercise, at all times, a really extraordinary level of care. Folie à Deux is ambitious, and, for me at least, that ambition has temporarily outgrown the capacity of the work to contain it – but if you set that aside then the piece is an opportunity to see a company really in the middle of making their own visual language, one that prefers fragmentation and collage (but not always abstraction) and wide open context. Perhaps they haven't quite found yet how their circus training fits into this, if it fits at all, but it's an interesting process to watch at its midpoint. So, once again, follow them with interest.