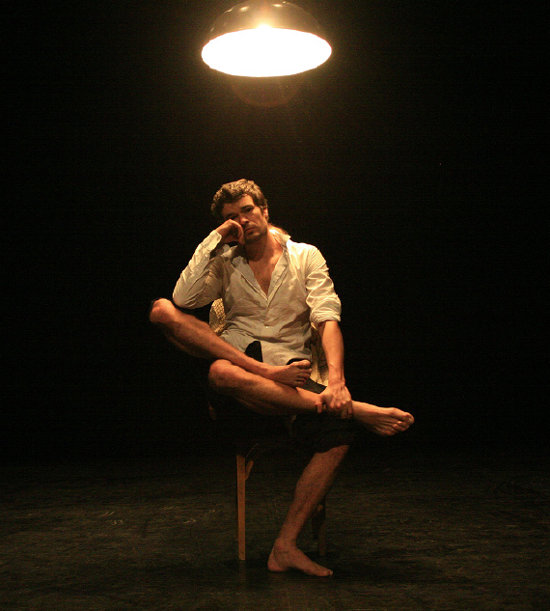 When was the last time you saw a circus artist thinking? On stage, I mean, in a performance — and not acting a character who’s thinking, nor adopting a soulful posture in relation to a tress of silk about to be climbed, but actually caught for a moment in some personal and inscrutable introspection. I’m not sure whether it’s a mark of my overexposure to circus performance or a commentary on its habitually adopted forms, but I felt shocked, almost, and somehow moved to see Mathurin Bolze perched atop a supine Hedi Thabet, motionless and staring blankly out, as he retreated to scrutinise some private notion or parade of hidden thoughts.

In all of Ali there is, I think, this blankness: no agenda, no argument, and not much of a motive beyond entwining the two physicalities of Bolze, a fluid and compact acrobat and a darkly laconic performer, and Thabet, who’s bigger and heavier (with more red blood perhaps) and who, it happens, has only one leg. Thabet performs here without a prosthesis and his corporeality has obviously written the material of the piece — the two circle the stage (bare except for a plain chair and hanging light) on crutches, or share a leg to become a conjoined creature — but it’s not the subject, in the sense that Ali can’t be said to be about Thabet’s life as interpreted from this one point of fact.

The bodies of Bolze and Thabet, in the great circus tradition, are in fact just different apparatuses, imposing strict conditions for movement that set the rules of the game. In Ali, weight is the primary condition, the rule to which all invention and flight must eventually collapse back. For most of the performance the only sound is the two performers’ bodies thudding into the floor. Thabet lands a backflip with a tremendous impact; both kick out on crutches and whip back down in a heavy rhythm; with no aid Thabet crosses a darkening stage in a series of great, sporadic leaps.

If I told you the piece was abstract or poetic I’d probably give you the wrong idea. When we call something poetic we’re usually ascribing characteristics of airiness, beauty, metaphor — perhaps even using it as an insult — but for all that the lyrical register is a part of their trade, it’s the poet who takes the most delight in the heaviest, bluntest, most practical, most workmanlike forms, and it’s the poet who has the greatest skill at cutting these everyday signs free from their ordinary context. In a show like Ali the language is another, but the poet’s intelligence is there, understanding how the direct, the simple and the concrete can be the vehicles for strange emotion and deep, unseen connection. It’s OK, actually, to just crouch there and think.

Left at just 25 minutes long, Ali is memorable and intense. With no music other than a scratchy old record to play the performance out and in, it demands and repays the concentration of its audience; without sentimentality, it offers no guide to how you should feel or respond. Ideas of tenderness, dependency, trust and friendship are ghostly and dissolving, and states of aggression, cooperation and jollity are pulled away like successive masks to reveal another mask beneath. By the end it’s ‘said’ nothing; instead it’s up to you.