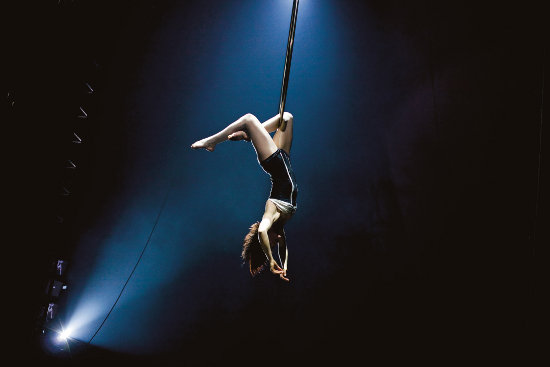 If you’re going I recommend tanking up beforehand. Not entirely facetiously; when you first walk in and the performers greet you and talk to you like they’ve known you forever a little alcohol will probably smooth over the dialogue, plus—like the only other show I’ve seen at the Roundhouse, De La Guardia’s Fuerzabruta—Tabú needs big reactions from the audience, and works best if you pay something slightly less than close attention.

The story, laid out in detail in the lush foldout programme then sketched at the show’s start by a voiceover, is that it has been raining a long time (4 years, 11 months and 2 days) and the world’s inhabitants have been ground down to a basic, functional level of existence, without emotion or colour, locked down by their fear (the ‘most widespread, undetected, un-acknowledged of taboos’). Then, in classic out-of-towner mode, a girl Amaranta (the girl that knows no fear) arrives on the scene to shake things up and remind everyone of the value of what they’ve lost. It might be quite hard to grasp this without the text exposition, which is fine by me, but what in the end hurts the show is that the potential for universal sympathy—more or less everyone feels sometimes that they’re not doing enough, giving enough, risking enough, etc—is never fully realised.

The main substance of the show is a dozen or so solo and ensemble circus acts: aerial rope, aerial hoop, German wheel, trapeze, and so on. The performers are beautifully costumed and given characters in the context of the world, but too often their skills-pieces don’t dramatise the original concept. There was for instance a cradle act that I didn’t get anything from. A cradle is essentially a metal frame used for doubles work. The knees of the base go over one bar of the cradle, their feet brace against another, and then they hang below the frame. Hand-to-hand the flyer swings (beats) off the base and at the top of swings—at the weightless moment that is called the Dead Point—executes somersaults and tricks. The duo in the show, Petri Ekqvist and Kadja Karjalainen, pulled very difficult tricks, but their routine was—perhaps because of its difficulty—performed mechanically. Every now and then they would climb to the top of the cradle and make out, rather unromantically.

Artistic Director Firenza Guidi has a little explanatory text in the programme that names Gabriel Garcia Márquez, and particularly One Hundred Years of Solitude, as a major influence on Tabú; it goes also some way toward suggesting that the show, although starting from a rough story, is less a linear series of events and more a set of orchestrated tonal shifts, using every physical, musical, sexual channel of communication to transmit the emotive resonances that would otherwise come out of narrative, to create a ‘total sensual experience’. I am so ready for this: circus that is strange and moving and inexplicable, that interweaves character and physicality so closely into its displays of skill that the result is indivisible. Tabú does it once. Natalia Fandiño on static trapeze is incandescent. Her solo routine, which closes the show, has to be one of the best I’ve seen. It’s rare to see aerialists who use their heaviness—who don’t just chase zero-gravity type effects—and the prescriptive undercurrent of the show, to live to the fullest, finds its truth in a performance which gathers together so much of the reality of being human: it’s distressed and exhilarated, introverted and showing off, and it seems, critically, not to cast off fear but to find some balance with it.