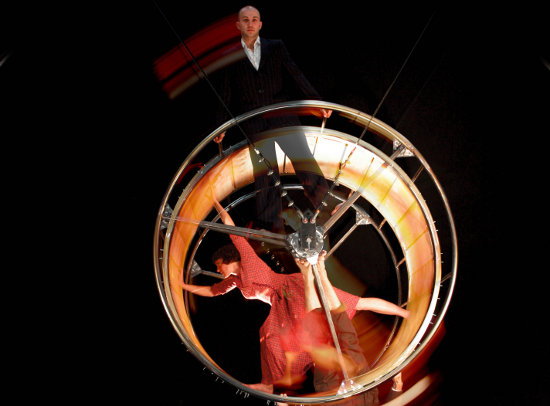 The Mill: a giant, suspended wheel, human-powered, wrapped in rope that runs out over a network of high pulleys to several smaller cogs. Four people tend it: one on the big wheel, one inside; two to perch upon the littler reels and walk them forward. Their drudgery is interrupted only by a voice, sounding from a loud speaker, which at periods commands them to rotate positions—and the system runs, absorbing and correcting human error, until a fifth worker appears and unbalances everything.

The Mill is Ockham's Razor's first full-length show, and it retains many of the strengths of their shorter pieces—particularly a keen awareness of the lyrical qualities of aerial work. During a mandated rest stop, sleeping twined in the pulley ropes they sweat over, the characters are lifted through darkness and light—swung toward the audience and away in a beautiful depiction of a dream of flight. The production is, as well, very good at lightness, very good at fun. Having broken the factory system and failed several times to remake it, four of the characters ride the outer spokes of the great wheel and laugh and shout: life's a fairground.

Of course for them to be able to ride the wheel a fifth person has to be powering it—a systemic inequality which has been the driving force in earlier work like Every Action, but which is not operating here as a set-up for sweet resolution: they want to cast shadows. For me this is where the production falters. The company perhaps tend most toward lightness and joy in invention, and the darker material at present doesn't sit so comfortably with their signature style. When the interloper who broke the system fetches a hefty slap and the five descend into a free-for-all brawl without control or allegiance, the fight has the character more of a ruck, and the inclusion of some vicious stomping feels out of place in a scene that ends with the Mill being turned into a gigantic spanking machine.

The Mill can be a fairground ride and a device for mild correctional punishment; what it isn't, or isn't in this production at least, is alive. The apparatus has an incredibly powerful presence, a malevolent energy or promise of danger, that the practical necessities of this large-scale production have mostly defused. The creaking and ticking soundscape has been composed from recordings of the wheel itself, but that sound, amplified and pushed through speakers, comes to belong to the building rather than emanating from its operational heart. The factory voice that pipes-in instructions has the same sort of effect: putting the authority outside.

The one moment when the Mill does come alive is when it first breaks—something comes free and the main wheel goes into a wild spin, pulling the detached rope violently through its pulleys. It was genuinely thrilling (not least I suppose because I was sitting stage-front and -right, very nearly under one of the pulleys as the rope thrashed its way closer), and had a kind of consequence which elsewhere seemed to be played down by the slow elephant walk of the music (Nothing will go wrong, it says, Everything is fine) and the static beauty of the lighting—primary colours that bloom over the stage backing and make The Mill's programme one of the lushest in recent memory.

Despite all of which: subtracting the circus in-crowd, who were palpably disappointed that the Mill wasn't used more extensively as technical apparatus, the audience were more than taken by the piece, and I think for some of them it will be a seminal moment in their art-watching, one that will overwrite their idea of circus with something fresher and more expansive. For myself, I'd like to visit the show somewhere further down the line. I saw Arc in its early days and again a year or so later and it had, without changing very much, changed entirely. At the heart of The Mill is the story of one character, played by Paul Evans, who pretends that he might shake the system, but in truth relies on it for stability and is profoundly disturbed at its sudden absence. It's a narrative told with care, in small gestures, and if the company finds a way to settle it with the production's other ambitions then The Mill will be larger and span greater spaces than their previous works.