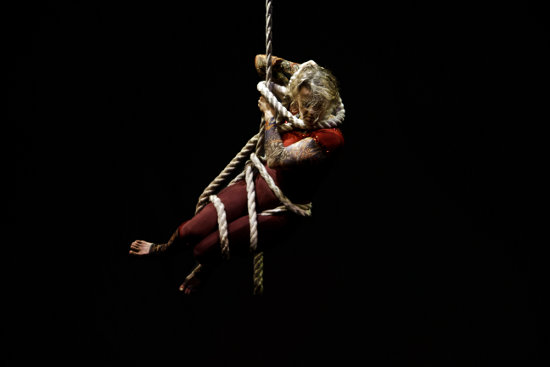 At a first encounter, the characters of Box of Frogs all feel like they’re about ten years-old. Kaveh Rahnama talks constantly and inconsequentially about his mania for collecting circus-themed toys and knick-knacks, shouting with delight when Amazon finally deliver his King Tusk elephant and enthusing how this proud and mighty creature is (brilliantly) equipped with a foot strop to secure its plastic rider — an innovation without precedent in the history of toy manufacture. Ringmaster Paddy Waters is either hiding away or repeatedly presenting himself with a flourish (‘a-ha!’). Lauren Hendry charts a wild course between squealing hyperactive outbursts; Silvia Pavone is the more sullen and teenaged. Juggler Chris Patfield and corde lisse artist Lyn Routledge are, in different ways, a little outside of things.

Supported by the Unlimited fund, billing itself as a ‘bipolar circus’, Box of Frogs is an uncertain and many-angled look into interpersonal conflict and close living (as, I’d guess, an analogy for intrapersonal conflict) that has an uneasy sense of fake authenticity. It chooses openness as a performance mode — the characters walk easily on and off stage to drag on props, or call out to the soundman; there’s a live band there in the corner — but at the same time those characters feel often like brittle and annoying caricatures, pushed to personality’s edge. Lyn Routledge spends most of her time somewhere on the scale between annoyed and furious — at Chris’ juggling, at Kaveh’s talking, at everyone’s childishness. As she climbs her rope she counts aloud for rage management, Kaveh babbling away on the floor, but her anger, too, feels acted, scripted, and the escalation of numbers became, for me anyway, more annoying, more abrasive, than the thing it was masking. There’s no relief, and I suppose that’s the point, and I suppose as well it would be easy and simple to make out that a few minutes of aerial can be the source of sublime calm, but I felt tight and on edge watching these sequences, as though I was being mistreated or badly handled for the fact of my attention — as though it was provocation without enlightenment.

There are, as well, a few dramaturgical choices in Box of Frogs that I couldn’t make head nor tail of. The blank back wall of the set receives massive projections that also circuit through the several TV screens lining its base, fracturing and multiplying the image into simultaneous high-def replicas that have the overcharged quality of a sparkling migraine. Juggler Chris Patfield features as video only (same goes for, very briefly, Gemma Palomar), the other characters watching him on one of the televisions (either rapt or in annoyance, depending) sometimes stepping into the video to join him. The juggling itself is focused and beautiful, shot in a bare white room, Chris in training clothes, but whichever way I turn it I can’t see where ideas of physical absence, or the private space drawn from skill and intention, fit into the rest of the piece. There’s at one point video of Kaveh in his caravan showing the viewer around some of his toy collection, still in gabbling enthusiast mode, but the volume’s toned down a bit and it’s funny without being clawing, so maybe Box of Frogs is embedding commentary about the stark gap between performance personae and the artists that construct them? But what happens on stage is a performance, and the characters, for all that they might perhaps have been drawn from the traits of the cast, are personae, so I don’t know...

If Box of Frogs is bipolar then I guess I prefer its depressive phases: Lauren Hendry’s low, gutted monologue about being just muscle and blood and ‘not enough’; a gripping single hoop solo from Silvia Pavone, performed in dim light, the hoop a silvery circuit of light. So too the opening image of the show, where Paddy Waters is pulled limb-by-limb from a heap of costumes, groaning, eeping, mumbling, to mount his trick cycle for some unsteady circuits of the stage; or the closing image of Kaveh, talking talking talking, being pulled down, gently, slowly, by the other members of the cast until he’s lying on the ground (still talking, cheek pressed flat on the floor) and they’re using him as a bench while they watch an odd final animation of tumbling symbols. It’s engaging sometimes, and unusual in its apparent commitment to needling irritation, but I left Box of Frogs feeling that I’d missed something, whether it was there or not: the point at which the ideas tied together with the characters and the circus and the design; the shape and the heart of it.