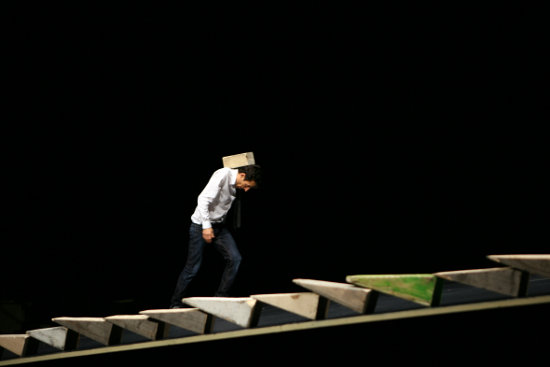 What's it got? Beats, rhythm, skills. What hasn't it got? Structure, narrative, dramatic sense. Played out on a raised square stage that tilts in all directions (slowly) as performers move their weight across it, Öper Öpis is the latest collaboration between clown Martin Zimmermann and DJ Dimitri de Perrot, featuring also a small assembled cast of European circus talents. De Perrot has a turntable-set at the side of the stage, and mixes and scratches the music live; at the start of the piece he is a controller, his beats dictating movement for cartoonish effect (a scratch is a nod of the head; a squeak is a slide downstage; silence is stillness), while toward the end the music functions as an overlay to the frenetic stage action, a soundwall that drives the piece on and, in part, disguises its failings.

So what happens exactly? A cast of six, three women and three men, act out meetings and small conflicts—either on the blank nowhere of the stage or in sketched out environments of discothèque, bar or gym. The tilting stage which was the show's main marketing draw allows a few tricks of perspective and scale—a low wall grows high as the floor before it subsides; a seated Zimmermann, about to be flattened by the descending stage, is saved as his head pushes open a hidden trapdoor—but otherwise has a fairly superficial connection to the material of the piece: the lurching, shifting landscape matches the chaotic onrush of the show, always changing direction, never on sure footing, but can't quite extend into the emotional/metaphorical space the company seems to intend.

Öper Öpis' biggest weakness is its character work; it's very much a piece that's been devised from a basis of group interaction, but the flat constructions we're presented with—large clown, small clown, over-voluptuous sensate, lothario, etcetera—can find no purchase. It's unreal in the sense that there's nothing to recognise, and the only moments that break through are those that appear fleetingly and by accident: a misplaced chair being audibly crushed by the tilt of the stage before Zimmermann can pull it free; a particularly heavy catch in the flying section that sends its ripples out through the audience.

The most interesting onstage dynamic is between Victor Cathala (quite large; playing a giant) and Kati Pikkarainen (an impassive and seemingly slightly stonily drunk woman who everyone desires). They've worked together doing doubles acrobalance before Öper Öpis, and toward the middle of the show they bring out a routine that looks like it was substantially pre-constructed. It's very good. After the noise and frantic action of the first half—dominated by cartoon exaggeration and tits / kung fu lines of humour—it's a welcome moment of attention and focus, the stage dimming and de Perrot's accompaniment shifting to a cold scape of echoes and birdcalls. Their act moves between fluid movement and absolute rigidity—and here Pikkarainen's stiff compliance feels like a tool of aggression: a hurtful silence. To some extent, it thaws, but even though the act has a satisfying arc when taken in isolation, in the context of the show it isn't supported by what goes before or continued by what comes after.

Öpis has its strengths. It can, for instance, be charming. I liked the final appearance of a dark basement, under the stage, where two puppets nod their heads to the music—their heads in this instance a box speaker and a bright ball of clothes. And there's a lovely trick where a single triangle of wood, sort of a large doorstop, is balanced point-first on Cathala's chin, becoming the base for a whole castle of multi-hued blocks, balanced yet asymmetric—an unlikely construction that seems to emerge from his thrown back head like a dream. There are as well some great skills on display and satisfying moments of aural and visual synthesis, but when toward the end the action and sound intensifies, you feel there's nothing really to climax, or no structure to dissolve—ultimately nowhere for it to go.