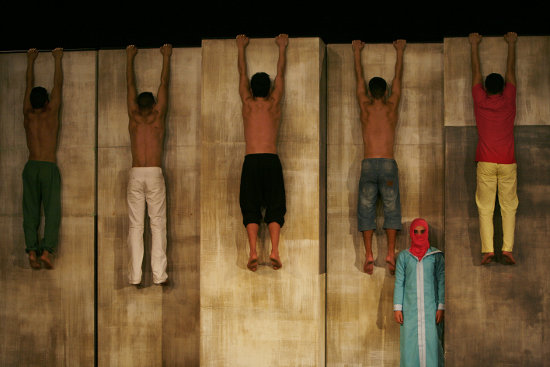 As we enter the auditorium, we see the members of Groupe Acrobatique de Tanger loitering onstage, a motley assortment of men and women of various ages – some tall, some small; some stocky, some svelte. They’re clad in cyan blue practice tracksuits that look a bit like a job-lot bought from a defunct sports team. Behind them, there’s a seemingly-solid sandstone coloured ‘wall’ and to the side a lake of discarded plastic water bottles. One of the company is doing a slow jog round the stage, and each time he completes a circuit he appears from behind the wall to chuck his plastic bottle onto the ever-growing pile of discards. The rest of the gang do a few stretches and some low-key handstands and whatnot. Trainers come off, hoodies unzipped to reveal loose-fitting pink or yellow T-shirts, or tight white vests or crop-tops, and the energy slowly builds. Chunky guys who look more ‘base’ than ‘flyer’ somersault and flip with ease across the diagonals, and there’s a spattering of applause from the crowd.

Then the moment happens: the houselights go down, the sound goes up, and the ante is upped. Everyone onstage switches into performance mode and becomes one great surge of energy, leaping and twisting and flipping until they’ve assembled themselves into an eleven-strong human pyramid downstage, precariously perched on the edge of the stage, towering over the front row.

So the show’s on the road – clearly, a show that will feature the fine-tuned acrobatic skills of a troupe of performers with breathtaking ability and showmanship, honed from a lifetime’s experience, often started at a very early age (programme notes telling us that one of the troupe had his professional debut aged three).

Should this have been an acrobatics show, that in itself would have been a delight, as the acrobatics are not only of a magnificently high standard, there are also a number of great twists on expectations. It may not, these days, be all that unusual to see a female acrobat as a base – but when the slip of a girl that is her flyer then goes on to base for one of the muscle-bound males, that does make you sit up in surprise.

For the acrobatics are weaved and woven into a series of poetic reflections on life in Tangiers, visual images and sounds combining to create something that resembles a live take on a city symphony film. That ‘solid’ sandstone wall moves and morphs, shifting from old-town (medina) boundary wall, against which the t-shirted youth of the town slouch and flirt, to become the high-walled side streets within the medina which are peopled by scuttling figures in veils and djellabas. Then, opening out to become the boundaries of a central square filled with musicians, card-players and street- sellers (not to mention acrobats, a crucial element of Moroccan street life!); and now again changing, this time splitting into high-rise blocks, one ‘tower’ spinning round to reveal a mass of humanity crammed within its walls. All human life is here – and a fair amount of animal life too, with the live crowing, meowing and barking of the performers echoed in the inventive soundscape – a soundscape that blends (recorded) rap and Rai; (sampled) concrete mixes of puckering mopeds and aforementioned braying beasts; and (live) sounds of scrunched plastic and plucked banjos. Oh and there’s some beautiful acapella singing, performed by the whole ensemble whilst shoulders are climbed upon and balances struck.

Visually, Chouf Ouchouf paints a pretty picture, the ochre of those walls-cum-blocks offset by flashes of mint green, peacock blue and fuchsia pink in both clothing and lighting. And the lighting design does a good job of shifting us effortlessly from day to night, with a gorgeous final image of a glowing brazier signifying the end of the night’s activities in the medina.

The show’s directors, Zimmermann & de Perrot (known to London audiences through their appearances at the London International Mime Festival, most recently with Öper Öpis) have gained a sizable reputation for their inventive use of large, mobile sets and for their fresh approach to sound design, so their influence here is clear – although, as with any devised work, it can be tricky to allocate ownership of any one aspect of the work.

Let’s just say that this is a very fruitful collaboration, and that regardless of where the starting points were, the end result is rather wonderful.