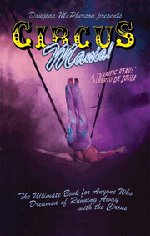 An episodic collection of journalistic essays and articles that range from critical appraisals of circus performances to interviews with leading figures in the industry, Circus Mania is a relatively trad book: author Douglas McPherson's (genuine) love for the conventional scene leads the material mostly toward the traditional circuses, the Yarmouth Hippodrome, Circus of Horrors, etcetera. Cirque du Soleil get a chapter, as do the Australian company Circa (Douglas isn't so keen on them, and in an interview afterward Circa director Yaron Lifschitz characteristically plays the performance down), plus there's a section on Circus Space that incorporates an interview with So & So's Kaveh Rahnama and Lauren Hendry (Kaveh does most of the talking), but still some readers are going to regret that the breadth and detail of the contemporary circus scene doesn't get a fairer shake, and that Cirque du Soleil (criticised several times by Douglas as 'arty' when arguably he means 'artless') are made to sit so centrally in an account of the contemporary scene.

So you may or may not find yourself nodding along at the jibes against artists funded by ACE to 'pretend to be a tree' (that one's actually courtesy of the gamely combative Gerry Cottle), but regardless there's probably something to interest you among chapters on the Yarmouth Hippodrome, animal circuses, clowning and the tented scene, Circa, freak shows and the Circus of Horrors, Circus Space, Zippos and their Academy of Circus Arts, clown duo Clive Webb and Danny Adams, Brian Austen and the Chinese and Moscow State Circuses, Cirque du Soleil, on-ice show Cirque de Glace, the early days of Pinders Circus, and Gerry Cottle and his youth circus at Wookey Hole. They're all fairly light accounts, and best perhaps for those who are being introduced to something that's new to them; for Sideshow the penultimate chapter, mostly an interview with George Pinder, is the strongest: a fascinating collection of first-hand and inherited memories that includes some information on Thomas Ord, a famous man in 19th century Scottish circus, and the performances he put on before tents came over from America: 'Ord performed in the open air. They'd dig out a ring to work in, and what they'd dug out they'd put in a bank that made a circle. He didn't charge people, because anyone could stand around and watch. So they used to hold a raffle. They'd raffle everything from a gold watch down, and that's where they got the money for the performance.' It's a densely interesting chapter which makes the rest of the book seem a little thin and under-researched by comparison: a patchwork of writing that'd be fine for a more casual journalistic context, but which lacks the weight or insight to really be considered (as it perhaps means to be) an access-all-areas guide to the circus world.