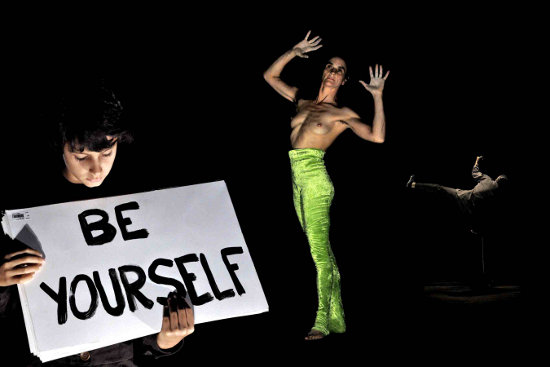 There's a certain kind of artist for whom their life is their work—meaning not just that they dedicate themselves full-time to their art-making, but that what they present on stage, or in books or on canvas, is, or feels, very close to the way they must conduct themselves from day to day. You get this sense with Acrobat—that they don't really have stage personae, that they don't act, that any affectation is temporary—and in the case of Propaganda (a family show that sees Jo Lancaster and Simon Yates onstage with their two children) they have put together a piece that explicitly lays out the ethical basis of their living, communicated through a series of propaganda slogans, written or shouted: RIDE A BIKE, DO WHAT YOU SAY YOU'RE GOING TO DO, GARDEN NUDE, TURN OFF THE TELEVISION, BE YOURSELF. The sentiments are obvious, but that doesn't really matter. Just as truisms generally need the little extra push of personal narrative or lyrical expression to get our full attention, here it is the circus skills that are meant to light and reveal what is hidden in plain sight.

In this respect, I admit, and feel a little bad admitting, that Propaganda didn't on the whole work for me—or do it for me, or whatever the verb is. I think it's a charming show, willing always to pull down its own cleverness and beauty—Simon Yates' Chinese pole solo ends ingloriously as he has to derig it himself (it's his turn); an earthy Jo Lancaster, topless and wearing silky green tights, becomes a mermaid by the addition of a cardboard tail leaned at her feet, taking the laugh only for a moment before kicking it away—and yet to me it felt as though the question of how to be good and to live well, ostensibly the show's reason for existing, had been resolved and internalised, and thereby rendered inert. There's a moment between scenes when one of the androgynous Acrobat children displays slogan cards for the audience as (guessing the pronoun here) he spins softly on a single point trapeze, serene except when the rotation slows and he has to sort of swim-kick round, wearing a lovely pair of angel wings made from responsibly-sourced and sustainable materials; I read the cards, and felt warm, and that's sort of how it goes: more relaxing than engaging, more friendly than agitating.

Among the skill work in the piece, recycled in part from the last Acrobat show, smaller, poorer, cheaper, there's a memorable solo from Yates, who taps gently at his solar plexus in between outbreaks of circling acrobatics, as if trying only to locate some minute point inside himself, and then a brilliantly funny slackwire routine that sees a man trying to take breakfast and get ready for work, soaking and covering himself and the stage in milk and cornflakes as the wire bucks beneath him. But nearest to the heart of the show are the doubles sequences, and particularly the last, where Jo and Simon ride together on a single bicycle, climbing not always unawkwardly over each other to balance and counterbalance handstands and dramatic outward leans, wearing brown sacky coats and what I will describe as durable utilitarian underwear: a routine that is roughly beautiful, unpretending, and ended with a kiss.