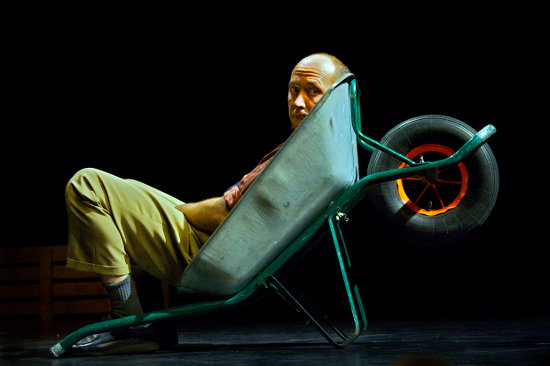 Different nations have different kinds of stage nudity, I think. Australian nakedness is blokey and exhibitionist, Scandinavian is black and white and full-frontal, Eastern European is durational and probably smeared in something, while the French variety is matter-of-fact, broad, comic, casual – family nudity. Le Jardin exports the French kind, the Royal Opera House's well-to-do audience especially pleased with Didier André's naked newspaper juggling, a single, thin broadsheet plucked and floated to protect his modesty (he nonetheless displays a certain amount of bare arse, and, then, just a little more following one catastrophic and presumably unscripted drop on a pirouette trick).

Le Jardin isn't really my kind of show. Characterising Didier André as a man too lazy to think, let alone move, motivated only by cake and (sometimes) juggling, and Jean-Paul Lefeuvre as a rather more driven and energetic early-riser, in essence the production is a clown piece, the relationship between the two performers expressed purely in interaction and friction: you understand one against the other. Each of the piece's scenes, united by the theme of horticulture but otherwise distinct, is inspired by an object to be found in the common garden. Lengths of hosepipe for sight gags about having enough hose to reach a water bucker, a wheelbarrow bounced roughly around the stage by Lefeuvre to the tune of André's banjo, oranges for juggling. Lefeuvre has a solo with a big hunk of rock, hefting it, balancing on it, throwing and catching it. A meditative combination of kettlebell presses and manoeuvres from doubles acrobalance, performed only in underwear, it's exercise as much as performance – unshowy, very relaxed.

There's a certain calm art in the way Le Jardin considers and explores the possibilities of everyday objects, and it comes across as a show that has it all worked out, and prepared, neatly – from the bright bunches of flowers that fly in on darts, to the tapes that play the music for each scene, hung on clothes-pegs in a line next to an old deck player, to the clever shadowplay of the end credit sequence. You couldn't say it ever falters, but it does at times run too smooth, and it'd play better outside, I think, in summer – because of the context of the show, sure; but also because outdoor audiences are more responsive, more demonstrative, and for an older show that's been rehearsed into the ground a restless and vocal audience is exactly the element of chaos needed. There's no doubt that Lefeuvre and André, two very experienced artists and entertainers, could take whatever was thrown at them, and their aptitude in covering for mistakes and sudden obstacles is such that you actually want tricks to fail or props to misbehave – to see them draw on their experience and improvise at the moment when they are most themselves.