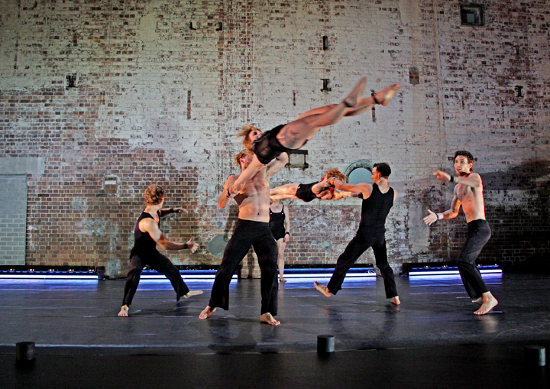 The Circa essence is sort of this: there are ideas and concepts and emotions that inhere in circus and they fly out in the moment of performance. Trust, risk, failure, pain, vindication, joy, hardship, strength. With a bare stage and some minimally thrumming music, the company create moments of exemplary and sometimes astounding skill. Cutting out the chaff of imposed narrative or imagined character, they replace structure with rhythm. Ignoring the ossified etiquette of regular performance, they accelerate. What happens then is whatever happens: it's up to the audience to read the work and, if they care to, to discern the ideas and concepts and emotions trailing in the wake of its constant action.

The company, comprising some new and some returning performers, seven in all, command your attention absolutely – as a troupe they have the same impressive breadth and level of skills as, say, new generation 7 Fingers, but they're decidedly more earthy and adult and, well... solid. They have a lot of tattoos, between them, and this sense of cold boredom as though they belong to the night but are disaffected with its pleasures. In Wunderkammer ('Cabinet of Wonder') they begin by interrogating the costuming and politics of burlesque and stripping, refiguring and entangling it within the power relationships and seeming masochism of circus performance; following the opening scenes it stops overtly signalling cabaret, though if you want to carry forward the interpretation there are plenty of opportunities: a racing trapeze sequence where a base takes the three desultory women who stand in a line and wait their turn for a quick fly; an act of painful balance where a woman in red stilettos walks across a man's broad shoulders; a lighter turn where a man undresses by removing plasters. For me though, mostly, in spite of the fact the performers are perpetually ½ to ⅘ naked, the burlesque aesthetic faded away, and I experienced scenes discretely and with little cross-resonance. As set pieces they range from very good to perfectly captivating: Emma McGovern’s long, wending, luxuriant corde lisse solo, performed in the narrow alley between two high lines of yellow lights, was one I immediately wanted to watch again, and just about any of the acrobatic sequences using the full ensemble were exciting and strange and urgent.

Among all this there's actually material from the company's last show, C!rca, that gets copied into Wunderkammer. Pointing that out I don't mean it as a complaint – but I think the fact the company is able to cleanly remove a segment from one context and place it in another speaks both of the pulsing, relentless nowness of their performance aesthetic and of their profound disinterest in presenting either adopted or (it feels like, even) natural character. There's something inhuman in it, which has nothing to do with the tremendous, unflagging skill of the artists. I guess partly it's the lighting – the stage edged by soft horizontal tube lights, a few stood vertically further in, fading in and out of blues and reds – and the choreographic decision of standing performers so often at mechanistic right angles, either in precise profile or front-on, but, more than this, it's the disregard of the circus artists themselves, their lives and motivations: while you can say that it's up to the audience to interpret and invest in the actions on stage (when, by the way, is this not true?), the performers are blankly unreadable so that, whatever you might feel, you're not feeling it in sympathy.

Circa's director, Yaron Lifschitz, describes circus as closer to a 'poetry cycle' than a narrative, but I think couching it in those terms hides an uncomfortable edge of cynicism in Circa's work and its deeply ingrained modernist rejection of continuity and lineage. It's like that young idea of coolness that prefers dissociation to relation and ignorance to empathy, denying responsibility and consequence. Perhaps you could say that cabaret is a perfect fit, but if Circa make another show that is not 'about' cabaret then I think it too will feel like this. Perhaps you can make what you will of it, but do they care what you make of it?