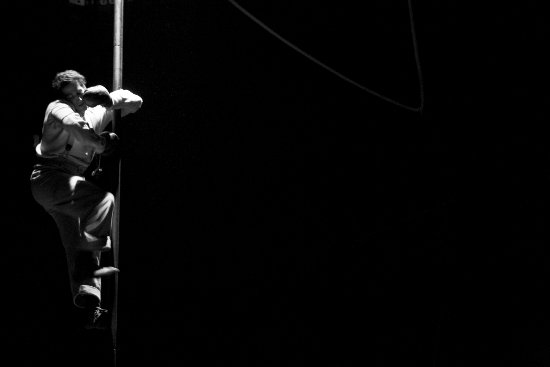 As the audience enter the small tent, Compagnie Rasposo are at table – eating, reaching across each other, talking, some sitting, some standing, one man building a card tower from biscuits, musicians to the side playing a jaunty air – and this is how Le Chant du Dindon mostly goes: hectic, gregarious, colourful, raucous. A few of the cast are genuinely family, and the rest fall easily into elemental roles of idiot cousin, angry uncle, bizarre grandfather, worldly older brother – they're all there.

But while it resontates with many of the characteristics of traditional circus (and is in a traditional tent with the traditional diabolically closely-ranked seating), Compagnie Rasposo's show reveals its intelligence and hybrid sensibility through the sly, satirical relationship it builds with the old world. It's an animal circus, but the animals aren't there to perform; just to be animals. The turkey (cast from the native population of Quebec, and allegedly much uglier than its French counterparts) is either a lapdog for patriarch Joseph Molliens in regal king role, or else slow-walks nervously around, a large, clumsy, unbridled, complete non sequitur. Then there's Julien Scholl's marvellously strange Chinese pole scene with a border collie. Julien arrives in the ring wearing old leather boxing gloves, his sleek-looking partner rushing out and off to lie a little distance away. Scholl boxes the pole, climbs it with grapples, fights and falls. Through the whole thing the collie's job is to watch the fight, lathe (i.e. lick) Scholl's face between rounds, and accept his gloves when its over. Anyway, it made me laugh.

As a show it's act-based, though has a neat way of threading together scenes that doesn't restrict its free associative charm. I especially enjoyed the way clown Vincent Molliens' fascination with string hatched at the beginning of the show innocently enough, grew through a later magic routine, and ended in a genuine heart-attack moment involving the securing line of a huge chandelier. As a company they're all good and talented performers. I guess I've seen a lot of wickedly strong circus artists, but as these things go they're usually part of larger spectacles where there's the dampening effect of distance; in the close proximity of the Rasposo tent I was amazed and not a little appalled watching acrobat Luca Forte, who is strong like the devil, power his way through a long and – to most people – challenging handbalancing sequence. On tightwire Marie Molliens has a faint and interesting noirish vibe, like the wire is a dark street she must walk down.

If I was going to complain – and of course I'm going to complain – there's one group hand-to-hand sequence with three men and one woman, where they push her down and across the stage, violently, and where that violence is eventually absolved because she ends up liking it and doing hand to hand with one of the aggressors, plus because there's a kicked in the bollocks joke, for levity. And I don't know; these sorts of reservations/objections tend to come in at uneven levels, but I nonetheless think it's a lazy way to construct an act out of context – if nothing worse, pedestrian when placed alongside the wit of the rest of the show.

But let's leave that aside. With live music – violin, bass, accordion, drums: old-time stuff – to match the pace and provide moments of visceral crescendo, Le Chant du Dindon rattles on. Gradually it cranks up its surrealism, finally entering a baroque mode where Joseph Molliens is borne in, with turkey, on a palanquin bed, the whole cast returning for a lavish display of bonhomie, laughter, Russian swing and showmanship. It's contemporary and traditional, with its own unique character woven between the two. It's the best of both worlds. See it if you can.