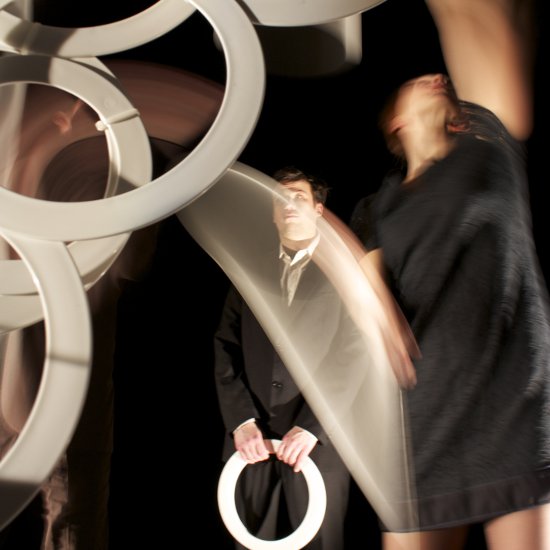 At the start of Motet there are juggling balls of all sizes and colours lying on the stage, and it's very dark. Sakari Männistö, wearing voluminous, brocaded trousers, treads daintily among them, moving from one edge to another, staring out and not in, waiting for something perhaps. From the corner of your eye you think you see something shift – a ball is rolling very gently, but nothing touched it. Sakari moves again and this time you think you're sure: two or three balls rocking as though touched by a breeze. Sakari is at the edge and doesn't see, and begins to step backward into the field, lifting his feet high in the courtly way, and as he does all the balls draw back, dozens of them, as if by magic, to clear him a path.

Pairing Gandini Juggling with the Finnish director Maksim Komaro (an artistic director of Circo Aereo and the director of Petit Mal), Motet has some of the hallmarks of either party's work: from the Gandinis there's the technical repertoire, the recognisable company dynamic, and characteristics like the Procession of Jugglers (last seen in Smashed!; here done Egyptian-style, in profile, against a canvas screen); from Maksim, there's magic (as in prestidigitation; which is still magic if you can't work out how it's done, or work it out too late) and a love of chaos and collapse. From one of the two, or from both, or from lighting designer Juho Rahijärvi, there are strikingly brilliant images – it's simple, but I can't forget the sight, particularly, of a dark veil that's spun into a wisp of smoke, thrown into the air, and caught in an orange net.

Joining the four core Gandini members (Sean Gandini, Owen Reynolds, Iñaki Sastre and Kati Ylä-Hokkala) is Sakari Männistö, who was magnetic in Smashed!, and who for Motet makes the minute adjustments necessary to turn his silent, deadpan style from sophistication and world-weariness to a boyish, innocent charm. Of course there's no cast list for Motet, but Sakari is the principle in the sense that much of the movement of the show revolves around him – sometimes literally – and he's a remarkable performer, or actor, or human collection of tones and moods. There's an especially beautiful scene near the start of the show where four jugglers are in a square, passing to each other, and at the same time dancing a gavotte that steps from one corner of the stage to the next. Sakari, his trousers hiked up into a sort of diaper, his bare skin smooth and soft, has a tiny orange net on a long pole and hunts the group, trying to swipe a ball but constantly, and with light confusion, failing. He dances after them, kicking up his heels.

It's perhaps down to some anxiety about the cohesion of the show that its elements are tied easily together as 'a history of juggling', because actually Motet's major interests seem to lie in the baroque period: in its music, in the codified movement and behavioural rhythms of life at court, and perhaps also in an era of intellectual life that was still chasing classical and formalist beauty while the conditions for revolutionary industrialisation were falling into place. A period in other words that seems quaintly oblivious when you look back on certain products of it – a time before the world got realer – and for me the strongest scenes in Motet are those where it finds ways to adopt this mode and simultaneously to subvert it: scenes that are like a croquet match at a haunted garden party, where there's a set of rules, and an etiquette, but also a ghost abroad who's moving the posts and skewing the trajectories. Characters are misty-eyed and a little confused, not quite seeing.

Outside of this strand, the show follows a basic kind of entropic narrative, progressively breaking down into full discordance of colour, patterning and objects – three white balls replaced with a ball, club and ring in primary-colour plastic, then a Swiss ball, hula hoop and inflatable chair. By the end the stage is littered and Sean Gandini reclines in the middle of it in the blow-up chair, smoking a massive let's say cigar. We're in the modern era, but the piece has left its heart somewhere backwards in time.

At Stoa, the very first performance of the work, Motet had material that you might expect to be changed or cut (particularly the two brief parts where characters speak in a naturalistic way, which is perhaps a carry-over from other, lighter Gandini work), but it felt also that it had some essence – that there was a mysterious and living world that might swallow the performers whole, and that there were moments that found their own unity of time, place and action that were as far away from the original understanding as it's possible to be.