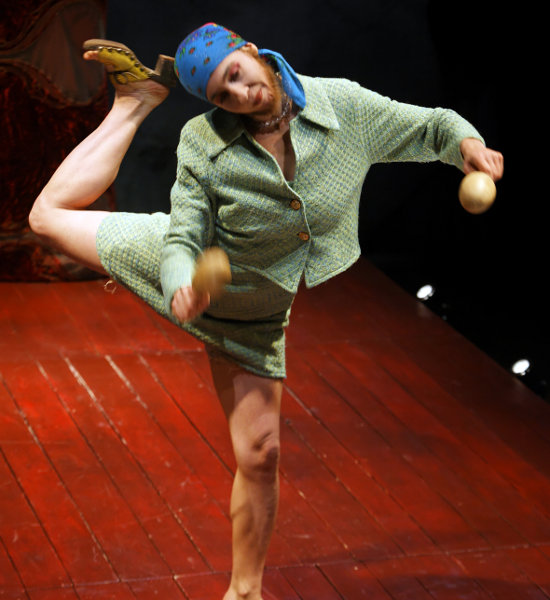 For an article I once had to ask London International Mime Festival co-founder and -director Joseph Seelig what he thought the future of theatre was. It got cut from the final copy (not my choice), but here’s what he said: ‘Attention spans will be even shorter than now, perhaps too short for words. Stitched together from the strongest limbs of circus, puppetry, movement and dance, visual theatre is an unconquerable monster destined to overcome all other modes of discourse.’

I’ve always liked to think of the Mimefest shows as shambling horrors—there’s scarcely been one that you could contain in a single category, and most in fact sprawl over three or four (my favourite skill-aggregation, if not quite my favourite show, remains Hiroaki Umeda’s Duo / Montevideoaki / while going to a condition: solo multimedia butoh streetdance). I think a lot of other UK festivals have caught up in terms of recognising the potential and quality of work that treats theatre as a total discipline, without borderlines, but no one seems to have quite the same reach as LIMF when it comes to pulling in new work from overseas. I always look forward to it. So alongside the new piece by Ockham’s Razor (previewed here) and a revised version of Mimbre’s Until Now (reviewed here in its early outdoor form), this time there’s work from France, Belgium, Portugal, Switzerland and Spain.

My favourite shows from Mimefests 2008 & ’09 were by the same company, French group Collectif Petit Travers, who’re back for 2010 with a new piece, Pan-Pot. They get billed primarily as jugglers and in the past juggling, mixed in with contact dance, has been a large part of their theatre language—but they’re great clowns too, adept at creating and resolving tiny struggles between stage personalities. Their first show, Le Petit Travers, about two characters sharing a dusty, leaking flat, was brilliant at this: it used the chaos of domestic disaster (the roof collapsing and water pouring in to flood the stage) to shake up the relationship of the flatmates. It was just very funny to watch the put-upon character trying, in a friendly sort of way, to maim or injure his oppressor—while at the same time their combined possessions were being washed away. Pan-Pot looks like it’s in a sparer, more abstract style, but I wouldn’t miss it.

Another returning artist is Joao Paulo dos Santos (aka the King of the (Chinese) Pole), a Portuguese circus artist who for 2008 collaborated with jazz musician Guillaume Dutrieux on Peut-Être, a duet that cast Guillaume (on rollerskates and playing a cello with a wheel instead of a spike) as Joao’s antagonist—when Guillaume played Joao was forced to climb, whether he wanted to or not. The exact nature of the theatrical relationship between Guillaume and Joao was never clearly defined or felt, but the production used its technical effects sparely and effectively (there was a nice live feed projection that gave Joao a doppelganger, and a great section without music where the sounds of his feet and hands on the pole were picked out and amplified), the music was good, and Joao’s an interesting circus artist (for Peut- Être wearing a custom costume that had patches of wetsuit material sewn into the stomach, inner arms, thighs, etcetera so he could really go for the open drops). The new piece, Contigo, is a solo and there’s not much to extract from the press copy—it’s about anger and loneliness, apparently.

The rest of circus work is from companies I haven’t seen before: Jeanne Mordoj, who started off travelling with caravan circuses, is the ventriloquist / contortionist / bearded lady in the solo Eloge du Poil (In Praise of Hairiness); Zimmermann & de Perrot’s Öper Öpis is played out on what sounds like an interesting piece of kit: a giant tilting floor; Circus Klezmer bring some old-world circus charm to the story of a wedding gone wrong; and there’s a pair of acrobatic two-handers from Okidok (Slips Inside) and Comagnie Ieto (Jeunes Talents Cirque winners). There's no festival quite like it.