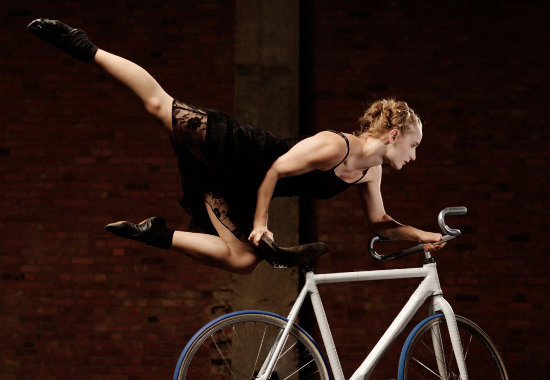 The programme for Migrations has as its centrefold a timeline of the history of diaspora, starting with the Phoenicians in Lebanon (c. -3000 BC), tracking the movements of the Huns, the Magyars and the imperialist British, and ending in 2007 with the arrival at Circus Space of the recently graduated degree students who are onstage tonight. Inspired partly by the UK press' lazy journalism, the migration theme is worked into the programme (which is actually a newspaper) and into the links between the night's acts (with the students arriving at the start, bedraggled, on a raft), but to be honest the whole frame could be readily dismissed without effect: it's pretty quickly pulled apart by the students themselves, whose performances respond to their own interests rather than any given brief.

Where the film introductions for last year's devised pieces pushed the students to contextualise their skills, Migrations has more acts in a cabaret/commercial style. I thought it was a little less interesting as a result, but there are still performers with engaging stage characters. Aurelie Bernard's bearded lady cloudswing is fun, and slightly unusual for bringing elements of corde lisse vocabulary to the swing, plus wins widespread horror/appreciation for a grotesque (but completely enviable) close shoulder dislocate/inlocate; Pablo Meneu Barreira's straps act left me slightly bemused (he tries to perform to Scissor Scissors but is continually interrupted by French voices talking about the comfort and utility of his beautiful rabbit-suit costume), but there's something likeable and game about him as a performer; Océane Peillet once again did swinging trapeze with great intensity and presence; Camille Francisci's slackrope piece, The One Where Camille Wears Goggles, was fey, but bearably, and eventually winning.

With so many students (it's a long night), there's a certain amount of repetition, and particularly there are three aerial hoop pieces which suffer from each other's company. It would be obnoxious to rank them, and anyway which you prefer will depend on surface features: whether you like your cerceau serious or broadly comic, how you feel about unitards, whether you prefer old crooning standards or the Native American chanting of a track that could conceivably be from an album called Sounds of the Spirit.

There were a couple of standouts. José Ángel Triguero Delgado performed a smart, abstract piece that played with the idea of a juggled loop as a dynamo, club spins and catches generating light in the darkness. In Why Do I Have Wings If I Can't Fly? Maximilià Calaf Sevé managed to pin down the Southern American vibe of his trampoline piece from last year. I've been trying to think how best to describe it and keep coming back to the idea of 'low pressure', like before a storm: there is something close and claustrophobic about it, with the trampoline made up by a few touches to become a sort of cramped trailer home. Starting with an accident, the piece sets Maximilià somewhere between consciousness and unconsciousness, a state for which the trampoline is the perfect ground: he can't fly but he can't fall down either.

Also refining existing material, Alice Allart has taken further her interest in working the trick cycle into a historic setting, and entirely overcome last year's performance nerves—possibly by the advantage of recasting herself as a cold-blooded murderess. A group of shabby Circus Space migrants are visiting a grave, and the tour guide tells them, and tells them only, that this is the resting place of Erzsébet Báthory, who lived 1560-1614. They mumble between themselves and file out as the stage darkens; when the lights come up there is a cruel, regal woman at a dresser and, at the back of the stage, a file of nine women, silent and in profile. When the woman, Erzsébet, goes to the cycle at the centre of the stage and pushes it to the ground, one of the nine crumples and faints; and as she begins to ride the cycle, laying back on it, standing atop it, the women fall in sequence. By leaving the narrative principally to intuition, the whole thing has the creeping insistence of a bad dream. I read about Erzsébet Báthory after.