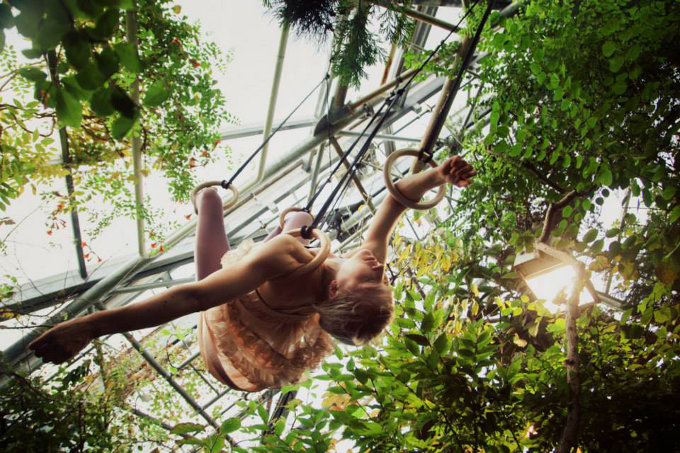 To open the new year, Sideshow invited a selection of circus artists to respond to a simple question: what are you going to be working on in 2015? Here Ilona Jäntti haunts the winter gardens, Vicki Amedume follows Matisse's lead, and Alexandre Fray moves towards a staging of the grandmother project.

I performed my show Muualla in New York at the start of January and then had surgery on my shoulder straight after. Aerialists Sanna Vellava and Eliska Brtnicka are going to be performing in my place in Handspun and A pony is a small horse for a few months until I get back.

In the spring I’ll be premiering a new solo, Namesake, in which I’ll work with aerial hoop (and other kinds of hoops, including some gymnastic rings). Then in September I’m going to premiere another new work, Pix græca, with the violinist Mirka Malmi, for the Finnish Radio Symphony Orchestra's chamber music concert series. For that piece I’m going to return to something I was exploring for an older show, Footnotes, and work with a trapeze and a second, free metal bar. I just visually like having those two metal bars, one loose and one fixed, so I'll be working with that and I think also with a second trapeze much higher up.

Through the year I’ll also be working more on Silver Lining (working title) – I want to make two versions: one shorter that could maybe be in gallery spaces, with the audience on all four sides; one full-length for theatre venues. I hope the short version will come in the late summer or early autumn, and the longer version in spring 2016.

Whenever I’m in Helsinki I perform in the Helsinki City Winter Garden – I do a lot of surprise shows there. There's no entrance fee and most of my performances aren't advertised so I get a very different audience from what I usually would.

Then at the very end of 2015 I’m going to be working in Oulu in northern Finland with my sister to create a performance at Zoological Museum. You can’t rig from the ceiling there, so I’ll have to be quite creative to make some aerial happen.

We have two exciting collaborations in the pipeline that have sprung from the work we did on our last project, What Happens in the Winter – a show that was primarily about ageing, using the lives of two female physical performers to draw parallels to the decreasing visibility of women in society as they age. When we were developing What Happens in the Winter we did participation work with older people, using aerial and other circus forms, in collaboration with Entelechy Arts. We’ll be working with the company more this year, developing ideas through a series of labs in the autumn towards creating a digital art piece working with professional circus artists and older people.

I am also getting excited about new writing. This year I tackle Bedtime Stories, a new project for families, and it will be my second collaboration working with a writer on an Upswing project. I am learning so much about writing, dramaturgy and narrative. I’ve learned what kind of narratives I am interested in and how they can create conflict with making good circus. I am learning strategies to create the work I aspire to make. I am learning to allow myself to follow my interests and not be concerned about definitions, and I am finding a way to better use the skills I love to communicate in the way I need to, and to sidestep some of the pitfalls of making ‘circus theatre’. If I said more this would become an essay but it reminds me of a Matisse quote where a visitor to his studio commented on how the arm on one of his female figures looked wrong and he responded by saying, ‘Yes, but you see this is not a woman. This is a painting.’

With Appris par corps we explored the potential of a relationship – the links and tensions inherent in the raw state of the carrier-flyer duo. In Face Nord, we created a vibrant writing determined by the rules of a game. This autumn we begin to research a new project with a fresh team of seven male and female acrobats and dancers. In the research we will seek the essence of our practices in their simplicity, in their demonstration, their brilliance. As we write and create we will attempt to preserve the real character of the circus action. We want to keep a state of presence, a nudity, a clean precision within the circus ring.

In 2015 I will also work towards a first staging of my 'grandmother project' – which began with a series of acrobatic workshops with elder women. Most of them had a terrible fear of falling – many had already experienced it. They know that if they fall once, they will not recover.... This fear grows insidiously, and, little by little, they do not dare to run, to jump, to discover. They do not know if they are held back because their body is no longer able, or because they are no longer able to believe in its force. And, of course, what you stop doing the body forgets. This is where I find the most meaning in the workshops: the possible reopening of each body as the person comes to understand the difference between what they cannot do and what they dare not. In the workshops they leave the doors as open as possible. They dare again, and enjoy the dare. They come to rely on the other – the partner, the friend, the neighbor – and to find again the thread of a self-confidence that is never so far away. Then their bodies and movements are beautiful – everything is small and huge at the same time.