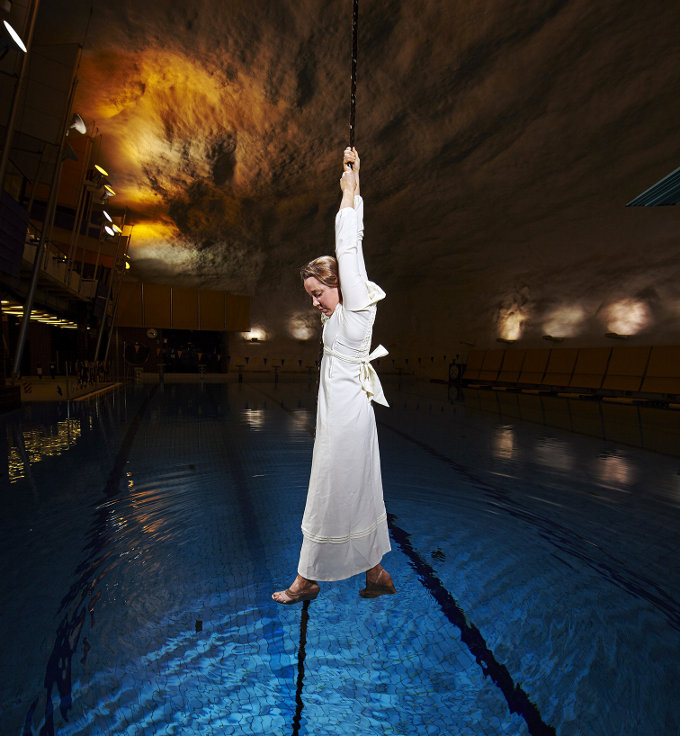 To open the new year, Sideshow invited a selection of circus artists to respond to a simple question: what are you going to be working on in 2015? Here Salla Hakanpää takes her aerial work underwater, Sisters get a carte blanche, and Proyecto Otradnoie head to Mexico and Europe.

2015 will set perhaps a personal record for number of performance projects. The year starts in Barcelona with Zero Gravity Company. We’re working for six weeks in La Central Del Circ and Ateneu Popular 9 Barris on our project Toisin Sanoen - In Other Words. We finish the residency with work-in-progress presentations, and afterwards move straight to Stockholm to give a demo at Subcase.

Toisin Sanoen is a performance about emotions, created with the focus on a single instrument: steel wire. In the creative process we’ve been exploring different ways of using the wire with three aerialists and one tightwire dancer; in addition to horizontal tightwires there are vertically hanging and diagonally rigged wires and wire loops. The show premieres in May 2015 at Pisteurs d’Etoiles.

In spring 2015 I’ll also be working on a site-specific performance called Dive, directed by Ville Walo. Dive plays in swimming halls and is a combination of aerial acrobatics and underwater movement. As an aerialist I’m used to working against gravity, but underwater it’s the opposite because of the pressure and buoyancy. A fascinating challenge!

Back in autumn 2014 I also started a new project with another circus artist, Talvi Janatuinen, and Improvisation Theatre Stella Polaris. In Sirkus Stellandia we aim to create a new form that seamlessly mixes circus and improvisation theatre. The show premieres in April 2015. Then after the super busy spring I’m going to focus on a new project: Valomatka, a circus performance based on a fairytale, with two circus performers moving in a jungle of light and shadows. The project premieres in December 2015.

The biggest event for Sisters right now is that we have our first long run in Paris, with Clockwork, at the Théâtre de la Cité Internationale. We’re there the whole of January, playing sixteen shows in total, and then in February we’ll finally come to play in Sweden. Being a Swedish company we’re pretty happy to go there at last! We’ll perform at Södra Teatern as part of Subcase, and then we’re looking to book a tour through the Nordic countries.

We’re still busy with touring Clockwork and will continue touring it in the next season, but in June we’ll be working on a project for Les Migrateurs’ festival Melting Pot. We’re going to have a residency and a carte blanche to create a little piece there with a band called 100%chevalier. They performed at the Melting Pot festival last year, which we also attended, and we were both really excited about each other’s work.

We only have two weeks of residency for the creation, and then one night to show something – so it’s small, but maybe it will be the start of something new. We want to go to the residency without any preconceptions: instead the idea is to start from a new point, and to create from within this particular circus and musical moment. It’s a white card; it’s a surprise.

Proyecto Otradnoie envisions a 2015 in which we collect the fruits of previous work and continue to open new artistic horizons. We launched our show Otradnoie.1 towards the end of 2013, spent 2014 on an international tour and on tightening our work and boosting its dissemination, and now approach this new year with the intention of performing as much as possible...

Appearing at the Festival Siguiente Escena (Mexico) last August we made friendly ties to the organisers, and they are now co-producing a Mexican tour for April 2015 (organised by the Ministry of Culture of Mexico City). In June 2015 we return to start engines in Europe, and we’re currently putting the finishing touches to plans for performances in festivals in France, Poland, the UK, Russia, Spain, etcetera.

Alongside this, we’re working on proposals for a site-specific project for Switzerland and Finland. Last summer Otradnoie also began a new era with a new company member in charge of promotion – Nico Agüero, who we’re working with to make our wishes come true, to share and transcend our particular artistic proposal, and to generate new ways to share, express and disseminate as a creative team.

Individually, the members of Otradnoie are also part of other projects being developed for 2015. Musician D2mau will be working with Cia ES and Animal Religion; Ivan Tomasevich collaborates with Karl Stets; Caro Larsen begins a co-creation with Yuridia Ortega and Javier Moreno; Ingrid Esperanza another co-creation with Cia Imaga; and Nico Agüero will work as producer and promoter with Cia Delá Praká and FaseQiatra.

A happy and peaceful new year to all!